An 8″ incision from the top of her head, down the left side.

A titanium plate replacing the part of her skull where they entered to remove the tumor that had metastasized from her lung.

And now, she’s in recovery,

saying she has a “bobble-head,”

but she’s alive, a survivor of brain surgery, and now minus a brain tumor. 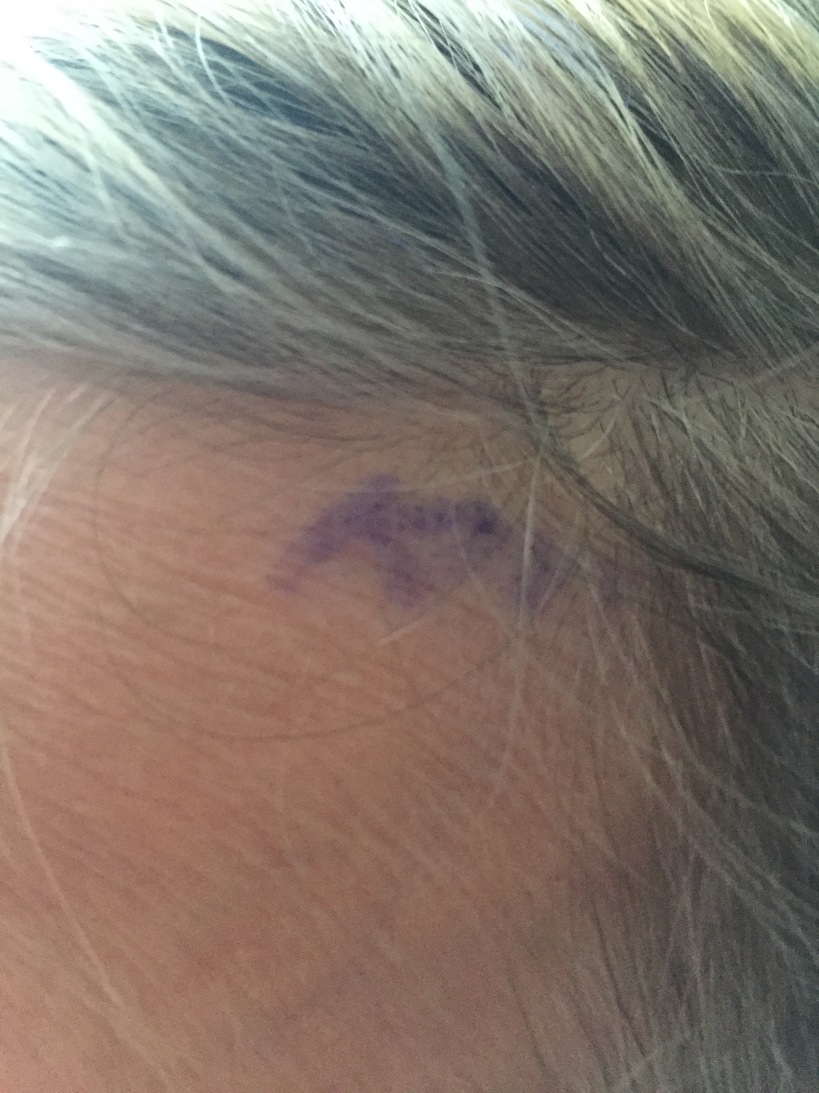 The surgeon signed his masterful work.

New Year’s Eve – a night to celebrate a new beginning, to maybe make resolutions and to toast to happiness!

However, after my first NYE in NYC, I’ve never really been the same –

If I’m not there, I’d rather be where I’m enjoying

the moment with a few friends or family, having a quiet, expectation-free celebration.

For the eve of 2015,  Jules, who coined the phrase, “Every Meal Matters,” asked us to dinner at her house.  She’d make dinner, probably filet, and asked me to bring only an appetizer.

Plans fell through last minute for LCP, so I asked Jules if it’d be OK for her to join us for dinner –

Without hesitation, Jules welcomed the extra mouth to feed and set another place at the table.

On the way to dinner, LCP said,

ugh, It’s always such a hassle!

“Just bring it without the bag and put the flash on it – we’re going to need photos.”

We took photos before sitting down to our surprise LOBSTER tail dinner! 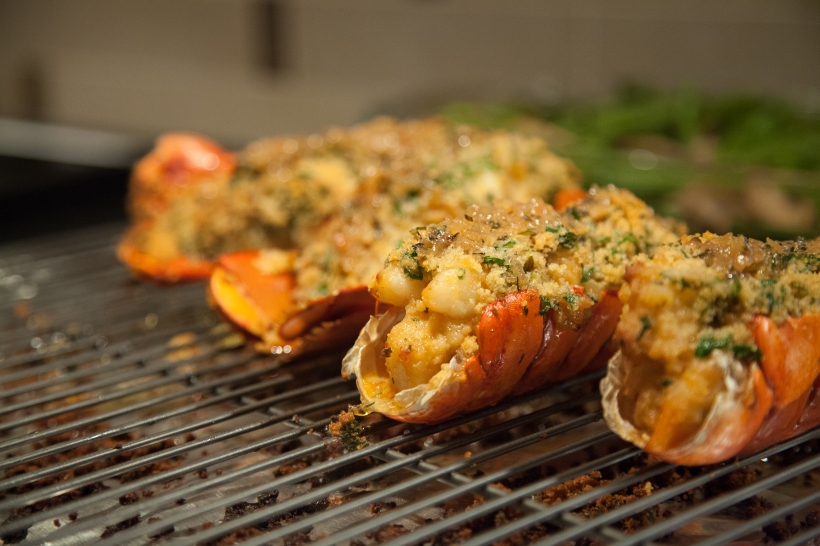 Jules had pulled out all the stops and surprised us with a food night to remember!

It wasn’t the hoopla of Times Square, where every second toward midnight matters, 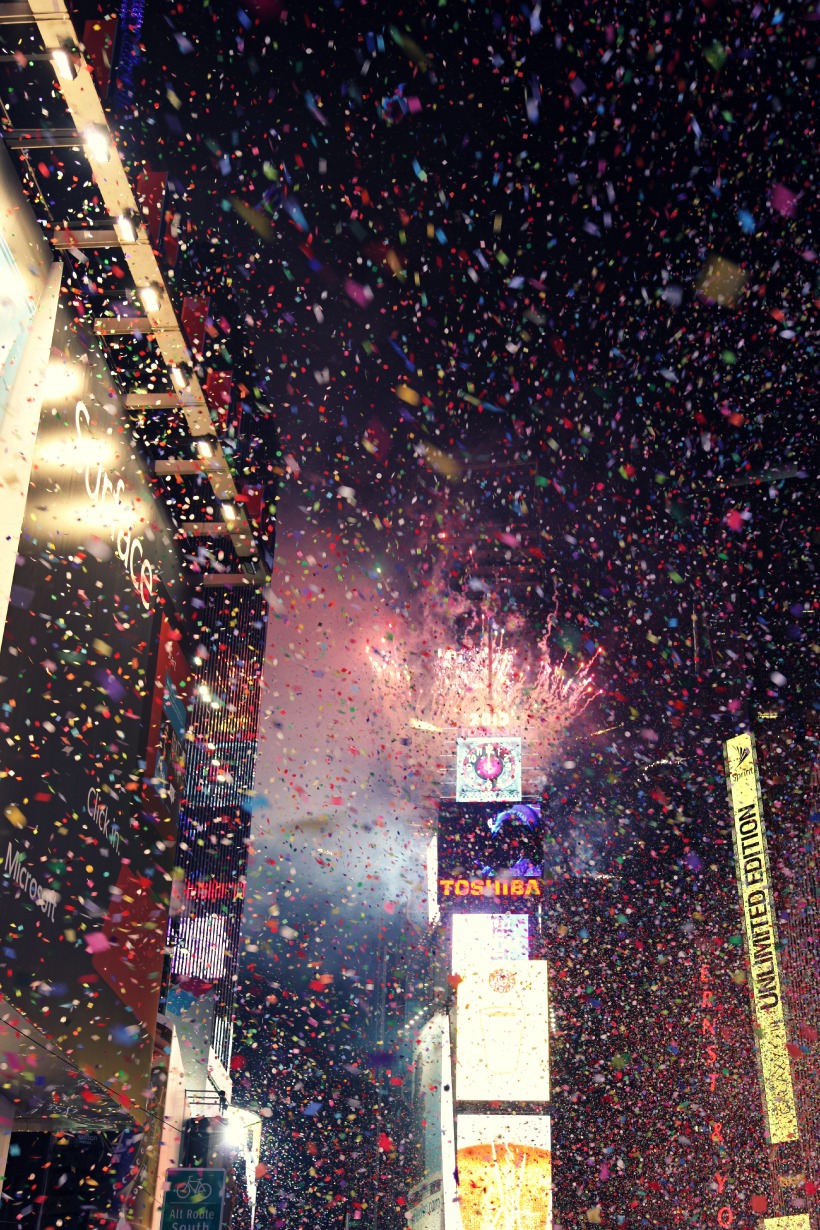 but it was the celebration of “Every Meal Matters.” It’s the who not just the what and where in the motto, Every Meal Matters, every day of the year,

so I’ve made my phone wallpaper a photo from the night when I listened to the suggestion, “take your camera…every moment matters.”

It’s now a constant reminder of who made us lobster on NYE, who got diagnosed with lung cancer 17 days later, and WHO really matters.

It is us, who are by your side, not just on New Year’s Eve, but every day.

What do you give your bestest buddy when it’s a time of crisis and you’re a first responder?

What can you give when the shock is real, and we’re both traveling through heavy fog?

Looking back at what I grabbed, I see the answer so clearly, but at the time, the decision was out of my hands

NeckGrace™, a travel necklace, has been born

– a tool for first responders.

“It’s all about the stories.” – Jules

The best part of our journeys is coming back to homebase, to each other,

and sharing the stories.

Unknowingly, I am about to get S-M-A-C-K-E-D by a breaking story, and like the world terrorism stories, it makes me want to turn it off –

Twenty minutes later, I’m transported to where it feels to be a million miles away from my desk. I’m staring into Jules’ eyes while she lies in a bed at Barrrows Neurological Institute ICU. I’m listening to her story, and this isn’t our kind of story that we ever imagined sharing.

I was working out on Saturday – I was on the treadmill, and my right leg went numb.  I got off the treadmill and went over in the stretching room and then my right arm had this weird feeling run through it, too.  It isn’t really numbness, but it won’t respond when I try to move it.  I got in my car and drove home. I couldn’t really feel my foot on the gas pedal. That night I made dinner, and I kept stepping out of my flipflops.  I dropped a glass when I misinterpreted how far my hand was from the counter.  I thought about going to the ER, but it had gotten late, so I decided to wait to see how I felt in the morning.  During the night, I thought, I think I may have had a stroke. When I got up, I got ready and went to St. Joe’s {Barrows Neurological Institute,] since I knew it was the best place for neurology.  I could barely walk or stand when checking-in.  The staff offered me a wheelchair, that at first, I declined, but later accepted.  I couldn’t walk – my right foot kept folding over to the left.

“How could this happen? I’m so healthy.”

“This doesn’t happen to people like me. I’m not sick.”

Hours later, after CTscans and an MRI, we got some answers from her neurologist, Dr. Kaibara.

Dr. Kaibara told us the story of what was going on in Jules’ brain.  Jules listened, asking questions intermittedly, as she heard her story unfold. The story was about her, only she was not the storyteller.

Jules has a tumor, about the size of a golf ball, on her brain.  The tumor has blood and cystic-type matter surrounding it. This is causing pressure to build on Jules’ brain, the upper left lobe that controls mobility.  Dr. Kaibara feels confident that the tumor is on the surface of the brain – this is good – it will make removing the entire tumor more probable. Surgery, although risky, will be performed and will reduce, if not eliminate, Jules’ partial paralysis.

the tumor on Jules’ brain doesn’t appear to be brain cancer.  It appears to have originated in another part of her body.

A full body CTscan and another MRI confirms the neurologist’s suspicions – the brain tumor is actually lung cancer that had spread to Jules’ brain.

Is this a sick and twisted storyline from some random TV hospital drama – a tragic episode of Grey’s Anatomy?

A real life cancer story, unfolding right before our eyes,

We’d skip this part or turn it off if we could,

but this journey has officially become our story.

Hanging on the exterior wall of an ironwork showroom, she caught my eye.

Immediately drawn to her, I stood and admired the movement of her red dress, the humility in her stance and the strength of her steel frame,

but I turned my back,

“…too much money to spend during the holidays, too big to load in the car and just too impractical.” An impromptu trip to Tucson for a mileage promotion, followed by lunch in Tubac, led me back to her.

She was still outside, hanging on the wall. The snow, rain and cold during the time away hadn’t seemed to disturb her.  Although, she’d moved a couple feet down the wall, she hadn’t changed – she still looked as fabulous as ever –

And the best part, she hadn’t allowed herself to be sold.

I admired her again and began to turn my back –

What?! She gets to come back with us?

The love must’ve been written on my face.

After a cradling in bubble wrap, a manhandling into the car’s backseat, and a ride in a car and up an elevator,

she arrived at her new home. 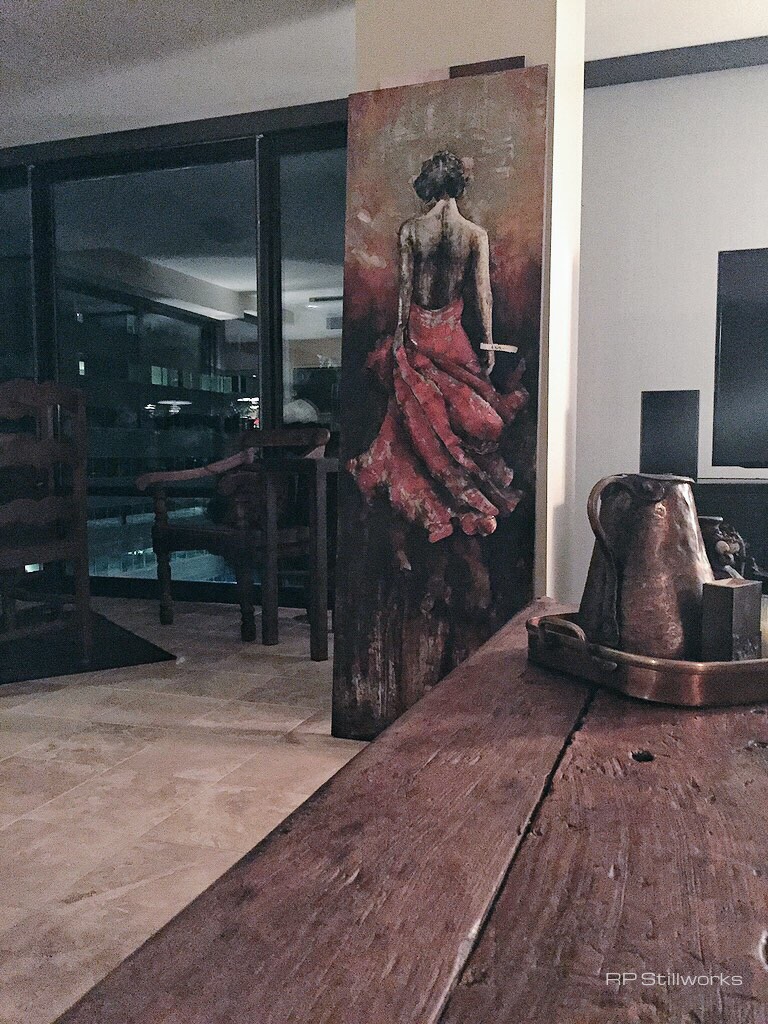 Thank you for calling me back –

“I felt like yesterday we were back, working again toward something good, together.”